Candy is Crack for Kids!

So Halloween just passed and while we didn't really celebrate, we did grab a bag of candy to give to any kids that came by our house.  Even though I have problems with the promotion of poor nutrition for kids, I'm certainly no Scrooge and since we're in a new neighborhood, I didn't want to be empty handed or be the weird house that gives out organic raisins (which was my original plan). 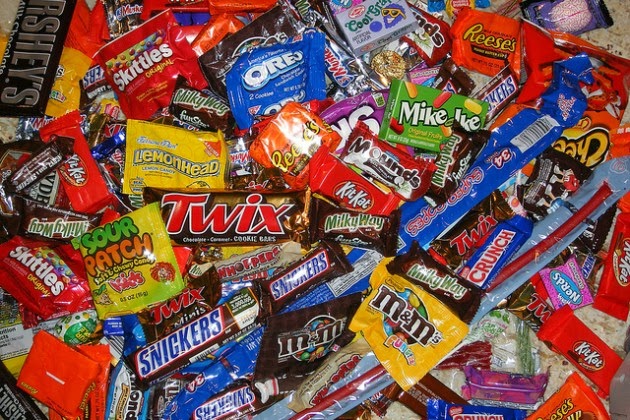 Leena-Deen was very interested in the kids coming to our front door and cried after each left!  It was like she was being teased by the prospect of a new friend only to have them leave a moment later.  When we ran out of candy, I ran to the store to grab another bag.  When I came back, LD was literally acting crazy.  My husband said she found a tootsie roll I dropped by our front door and managed to open it up and eat it. OMG!  She was bouncing off the walls and muttering incoherent baby sentences while simultaneously laughing out loud.  This is what happens when a kid who doesn't regularly eat sugar eats one small piece of candy!  Her candy "high" lasted for about 10 minutes and tapered off to general silliness.

While I felt sort of bad for breaking our cardinal rule of giving her candy, it was interesting to see her reaction.  Of course that won't be happening again.  After her withdrawal and return to normal, I noticed her looking around for the candy (like a fiend!).  I distracted her with water, toys, and dancing around until she was tired enough for bed.  Hopefully she doesn't relapse and start scouring the house for bits of sugar.  I think I'll give my raisin plan some more thought next year!

Don't feel bad when you break your diet or you kids.  A slip up is not big deal provided you acknowledge it, address it, learn something from it and move on.  Life is short, so if you cave into the ice cream craving or give your baby something you never said you would (i.e. candy, juice, soda), don't sweat it.  Just discard the evidence, stock up on healthy replacements, and hope that they forget about it.   Out of sight, out of mind!
Posted by Unknown at 8:50 AM No comments: