Bun in the oven

I'm happy to share that we are having another little girl. She's due beginning of January. I'm glad I kept some of Leena-Deen's clothes and baby supplies so we really don't need to buy anything. The only thing I'm considering is a double stroller. But I'll marinate on that idea for a bit.

In the meantime, I'm trying to eat right, get rest, and keep up with my two year old. Oh and did I mentioned Leena-Deen is potty trained!

Yes we accomplished this feat just before her 2nd birthday last summer. So I will avoid having two little ones in diapers. Maybe I can teach her how to help change her little sisters diapers which will of course be the cloth hand me downs Leena-Deen used.

Stay tuned for more updates on my 2nd pregnancy and Leena-Deen's adjustment.

Pregnancy is a magical blessing. It wasn't exactly easy as I've had two losses, one of which was earlier this year in February. My way of healing and moving is knowing that my body wasn't ready and the baby wasn't healthy. Perhaps this is why I put so much into my daughters heathy diet and development. Her life is so precious to me and I want her to be strong and healthy.

Some of the books I've read that have given me great perspective on my own body's strength and wellness are Heal Thyself by Queen Afua and Mama Glow by Latham Thomas.

I'll build my book list and post so you can see the other books that have inspired me.


Any of you on your second, third, fourth....pregnancy?

What advice can you share?
Posted by Unknown at 2:44 PM No comments:

For the past three weeks, my mother who just turned 64 last Friday, has been following a vegan, gluten-free diet.  This all started when I scolded her for having so many processed diet snack foods in her pantry.  All this "fake" food was gross, and she's been eating it for years.  My mother is not overweight.  She never has been, but I think she's been eating this low calorie foods to stay that way.  She has a petite frame and I can't imagine that she'd ever really pack on too much weight.  My main concern was that the processed foods were full of artificial sweeteners, high levels of sodium, and other chemicals and preservatives that could't possibly be good for long term consumption.  So I put my healthy parent cap on and sat her down to school her on some of the benefits of natural and homemade foods as well healthy alternatives she could buy at the store.  I told her her that some of her mild health problems would probably improve by simply making these changes in her diet.

Well, my mother, who shall I say is a bit dramatic, took all of this to heart, and has been following a strict vegan and gluten-free diet for nearly a month and plans to continue to do so.  I'm proud of her, but I don't want her to get bored eating the same organic beans, brown rice, and salad combo everyday.  If that happens, she might be tempted to consume some of the junk in the fast food places in her neighborhood.

So to spice things up, I've made her some yummy options to indulge in.  All are vegan and some are gluten-free.

For her birthday I made her a vegan, gluten-free double layer chocolate cake (recipe)

Other snacks and meals I've made are:

So my mom is looking good and feeling great!  Stay tuned for more updates on her journey! 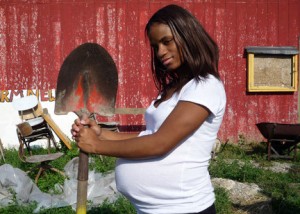 What if all women were taught how to farm and create sustainable and nutritional foods for themselves and their families.  What if the community supported these efforts and provided land and resources to do so?

I just saw the documentary, Grown In Detroit which "focuses on the urban gardening efforts managed by a public school of 300, mainly African-American, pregnant and parenting teenagers".  In the film, "The young mothers, often still children themselves, learn to become knowledgeable about the importance of nutritional foods, the process by which these foods arrive at their plates, and ultimately, to become independent and self-empowered through the process of farming. Many of them start out disliking the often physically hard work on the farm, but this aversion disappears as they see the fruits of their labor growing and being sold for profit." (Grown In Detroit).

This is happening at the Catherine Ferguson Academy for Young Women in Detroit.  The school was nearly shut down a couple years ago, but it's opening under a new charter this fall.  I wish there were more places like this in other states.  It would be particularly useful in my home state of California.

Do any of you know of other similar schools or organizations?  Do any of you grow any food at your home or support a local farm?

Posted by Unknown at 6:38 AM No comments: 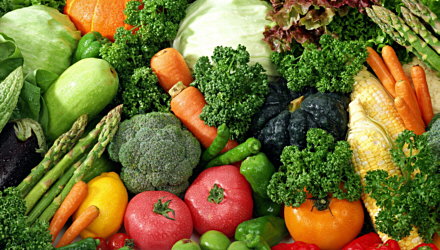 LEENA-DEEN TODDLER FOOD MENU
(VEGAN)
Start each morning off with kisses and WATER!

LUNCH/DINNER (any of the following)
·         Cooked sweet potatoes and spinach or greens (seasoned with salt/pepper).
Drizzle potatoes with honey or maple syrup for added flavor. Add a spoonful of
beans or lentils on the side. Applesauce, fresh fruit, or a couple cookies for
dessert.
·         Cooked beans and brown rice. Add spinach or greens on the side. Applesauce,
fresh fruit, or a couple of cookies for dessert.
·         Peanut butter and jelly sandwich on whole wheat bread, served with juice/water
blend and same dessert options as above
·         Lentil or minestrone soup with whole grain bread or crackers and side of cooked
spinach
·         Green smoothie: organic apple or orange juice base, add frozen or fresh spinach,
kale or other dark greens, carrots, oranges, ginger. Blend and serve in sippy cup
with straw.
·         If not hungry or for a quick meal, hot cereal or a smoothie is always a good option


selection)
Posted by Unknown at 11:42 AM No comments:

i don't usually like to preface things with the word "black".  but sometimes to make my point, i want to mention it because it sheds some light on the feelings and support or lack thereof I get when i have certain ideas or practices that are atypical to my "blackness".  For example, on holidays, special occasions, or at least once a week, traditional African-American families eat "soul food" which is high in fatty meats, cheeses, oils, butters, and overcooked vegetables soaked in animal fat, salt, butter, etc.  Don't get me wrong, the stuff is good, and many other people from part take in these indulgences, but considering the obesity epidemic, heart disease, and other problems associated with this type of diet, we decided to avoid it all together.

my mother and other family members sometimes worry about me and my "ideas".  i usually have to preface things I mention to her by saying "now i know what you're going to say, but here me out..."

me and hubby had an informal checklist for raising our first born:

breastfeed for at least a year. check.
cloth diaper and hand-wash and line dry. check.
make homemade organic baby food. check.
stay away from vaccines. check.
decide on a diet for our little lady???

we're still trying to work that out.  as of now she's a vegan. i'm not even a vegan (i'm trying to get there), but the baby is quite content with her diet of veggies, fruits, nuts, nut milks, and beans.  She self-weaned after 16 months of breastfeeding during which I also pumped milk. I had hoped to breastfeed or
least have a supply until she was 2 but she wasn't interested in nursing especially after she discovered walking and running around and my pumped supply didn't last very long. While I wanted to avoid formula all together, I did break down when we went on vacation and found organic formula for her to have something in lieu of my breast milk. I started with Earth’s Best Organic Infant Formula and then switched to Baby’s Only Organic Formula which I found to be a little more agreeable. My husband was against formula and spending money on it especially since we had gone over a year on FREE breast milk and thought her nutritional needs could now be met with food since she had grown some teeth and was very interested
in eating. So after a couple months on the organic formulas, we did some research and came up with a menu where she could get all the amounts of vitamins she needed. She now gets more than enough whole, grains, protein, calcium, Omega 3, Vitamin B-12, Vitamin D, and Vitamin C through all the different fruits, veggies, nut milks, whole grain breads and cereals she eats. And boy, does she love to eat!  Here’s a sample menu I left for my mother to use when me and hubby went away for a week trip.

I think its a great menu to start off with and as she gets older, we can add new dishes. Is she missing out on yogurts and cheeses, ice creams and other "treats" kids enjoy.  not really, since she's never had it and we occassionally give her the dairy free ice creams and treats.  Of course we don't want her to be that weird kid in school that can't eat anything, but my hope is that healthy and conscious eating will become more mainstream so she won't be the odd girl out. Our main objective is for her to be healthy and avoid the toxic GMOs, hormones, and other gross chemicals found in meat, dairy, and other processed and packaged foods and beverages.  Additionally, I don't want her to develop bad allergies, mucous buildup, ear infections, and other bodily function problems which I suffered from as a kid due to my un-diagnosed sensitivity to diary and wheat.  I know there is organic and free range milk, eggs, and meat products, but her diet is complete.  Take a look at this vegan food pyramid. 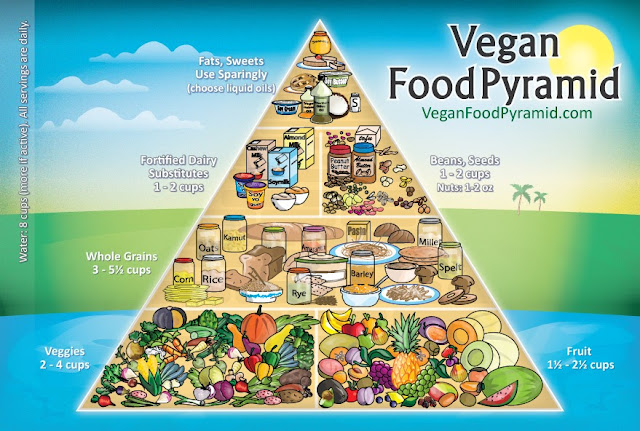 We are considering introducing organic eggs or wild fish into her diet.  This will likely be after my husband gets his dream farm and we can raise our own chickens and go fishing. But for now, she’s very content with her vegan meals.  I'll be posting some of her favorite dishes so stay tuned.

What do you feed your little ones?